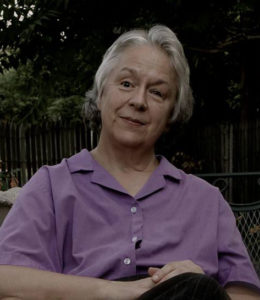 BIO: Melanie Tem was a writer, a gifted oral storyteller, a playwright, a teacher, a social worker, a mother and grandmother. She received the Bram Stoker, International Horror Guild, British Fantasy, and World Fantasy Awards for her writing, which included almost a hundred short stories, twelve solo novels, and numerous plays, poems, and storytelling performances. Among her novels: Prodigal, Wilding, Revenant, The Yellow Wood (her last), and Black River, a fictional exploration of grief as a hero’s journey. As a social worker and administrator she worked for the elderly, the disabled, and adoptive children and parents. A speech of hers on unconditional commitment is still used in parts of the country in the training of prospective adoptive parents.

She was born Melanie Kubachko on April 11, 1949 and grew up in Saegertown PA. She attended Allegheny College as an undergrad, and earned her master’s in social work at the University of Denver in Colorado. When she married the writer Steve Rasnic they added the joint surname Tem.