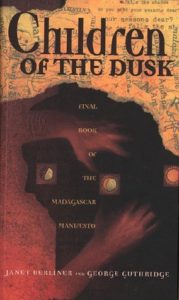 Children of the Dusk by Janet Berliner & George Guthridge, Winner
The Church of Dead Girls by Stephen Dobyns
My Soul to Keep by Tananarive Due
Earthquake Weather by Tim Powers

Lives of the Monster Dogs by Kirsten Bakis, Winner
The Art of Arrow Cutting by Stephen Dedman
Hungry Eyes by Barry Hoffman
Drawn to the Grave by Mary Ann Mitchell
The Inquisitor by Mary Murrey

“I Am Infinite, I Contain Multitudes” by Douglas Clegg
“A Plague on Both Your Houses” by Scott Edelman
“Madame Babylon” by Brian Hodge
“Rat Food” by Edo van Belkom & David Nickle, Winner

Things Left Behind by Gary A. Braunbeck
The Throne of Bones by Brian McNaughton
Painted in Blood by Lucy Taylor
Exorcisms and Ecstasies by Karl Edward Wagner, Winner